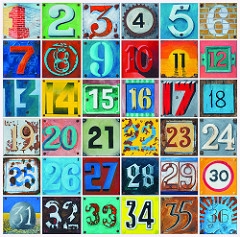 1. ONE
- One-horse town: a small town with not many interesting things to do or places to go to.
- Back to square one: Back to the start
- All in one piece: Safely
- Hundred-to-one/million-to-one chance/shot: a low probability of success

2. TWO
- To have two left feet: to be very awkward in your movements and to be very bad at balancing, especially when you are dancing or playing a sport.
- It takes two to tango: a situation in which two parties are both responsible
- To know a trick or two: to have an unorthodox solution to a problem
- The lesser of two evils: something that is bad but not as bad as something else
- (there are) no two ways about it: said to express certainty or inflexibility
- to be of two minds: to be undecided
- to put two and two together: to guess the truth from what you see, hear, etc.
- To stand on (one’s) own two feet: to be self-sufficient
- To tell (someone) a thing or two: to scold
- Two can play that game: the possibility that one who has treated another badly may be treated that way in return
- To put in your two cents’ worth: to give your opinion about something, even if other people do not want to hear it
- Two of a kind/two peas in a pod: two people who are very similar (or, in the case of the second expression, often in each other’s company)
- Two shakes of a lamb’s tail: a very brief period
- Two wrongs don’t make a right: doing something wrong in response to another wrong is not justified
- Two-timer: someone who cheats on a partner
- To be phony as a three-dollar bill: to be patently fake
- To be queer as a three-dollar bill: to be very peculiar

3. THREE
- three-alarm fire: something as exciting as a major structural fire (the number referenced may vary)
- three cheers: praise (also used sarcastically)
- three hots and a cot: jail or prison as a place where three hot meals and a bed are provided
- three-ring circus: a confused or noisy activity

4. FOUR
- On all fours: on your hands and knees like a baby.
- Four corners of the earth: all the parts of the world
- Four-eyes: a mocking term for someone who wears eyeglasses
- Four-leaf clover: an allusion to good luck because of the notion that finding a clover with four leaves, which is rare, will bring good fortune
- Four-letter word: an obscene or vulgar word, from the fact that several such words have four letters
- Scattered to the four winds: widely dispersed

5. FIVE
- to take five: to take a short break. The five refers to five minutes, so we're taking a 5 minute break.
- five-finger discount: shoplifting
- Give me five: slap my hand (as greeting or acknowledgment)
- Slip me five: shake my hand

6. SIX
- to deep-six something: to dispose of or get rid of something
- to be six feet under: to be dead and buried in the ground
- It’s six of one and half a dozen of the other: There is not much real difference between two possible choices
- Six ways from Sunday: every possible way

7. SEVEN
- Seven-year itch: a desire to cheat on one’s spouse said to manifest after seven years of marriage
- To be at sixes and sevens: To be confused or in a state of disorder.

8. EIGHT
- behind the eight-ball: in a difficult situation (from the pool ball numbered 8 as an obstacle)
- eight-hundred-pound gorilla: any formidable obstacle
- to eighty-six someone: to eject or get rid of someone, or to refuse someone service

9. NINE
- a stitch in time (saves nine): it is better to deal with something immediately because if you wait it may become worse or more difficult and cause extra work
- dressed to the nines: very well dressed
- to have nine lives: to have good luck (from the notion that cats have nine lives)
- whole nine yards: as far as possible, or the entire amount
- To be in seventh heaven = to be on cloud nine: To be very, very happy about something

10. TEN
- Perfect ten: something that couldn't get any better - it is already perfect.
- hang ten: a greeting referring to the surfing challenge of hanging all one’s toes over the front end of the surfboard
- ten to one: very probably
- Possession is nine-tenths of the law: if you already have or control something, it is difficult for somebody else to take it away from you, even if they have the legal right to it

11. ELEVEN
- At the eleventh-hour: at the last possible moment just before the deadline or end.
- up to eleven: up to a great degree (an allusion to a volume dial going past the usual 1-to-10 scale)